This study was aimed to identify Paradiplozoon bliccae (Monogenea: Diplozoidae) in an endemic fish species Pseudophoxinus burduricus (Teleostei: Cyprinidae) and to describe parasite’s prevalence and intensity of infection. P. burduricus specimens were collected between January 2014 and February 2015 in Doğanbaba Creek (Yeşilova-Burdur). A total of 60 P. burduricus specimens were examined for monogenean parasites. During the course of surveys, diplozoid specimens were collected from the gills of these fish and examined microscopically for identification. Paradiplozoon bliccae specimens were isolated from the examined fish. Prevalence, intensity, and seasonality of infection, age classes, and sex compositions of the infected population have been calculated. It has been recorded that the highest point of prevalence being in summer and the highest invasion value in the two-age class of fish. Hyperaemia, haemorrhage, and atrophy of the gills were observed during pathological examination of the parasite infested fish individuals. 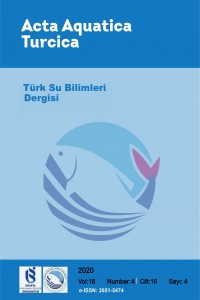