Over the centuries, cooking with traditional methods has continued. In the last quarter century, a new cooking culture has begun to develop instead of traditional methods. These are modern kitchen methods using innovative techniques including molecular gastronomic techniques such as sois-vide, haute cuisine, molecular kitchen. While molecular gastronomy (MG) was being used popularly in developed countries such as America, Europe and Japan since the last quarter of the century, the concept of has started to flourish in Turkey very recently, since the last 3-5 years. In recent years, undergraduate and graduate courses were started to be offered in universities under the head of gastronomy and culinary arts departments. Gastronomy and molecular gastronomy, one of the most popular food production departments in recent years, has become one of the most interesting parts of the present and future. The meals are prepared without applying heat treatment processes and especially using innovative methods related to MG. The most famous processing methods in MG are vacuum packing, low temperature baking, foaming technique, gelling, sowing and emulsification techniques. Also, various additives are used in these methods. As a result, traditional cooking methods have left their place to new products of MG prepared with scientific methods and techniques, such as caviar and salad applications in a parmesan baske 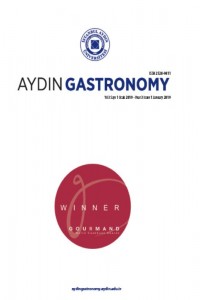