Fire-affected soils have recently received more attention in soil science because some of the atmospheric CO2 emissions have directly been driven from soils during fires and climate change has increased fire frequency in many ecosystems of Earth. However, low-intensity surface fires and their effects on soil properties have been relatively less studied in comparison to moderate to high-intensity crown fires. In this study, the effect of a surface fire on the chemical and biological properties of soil with a thick organic layer was investigated in a mixed forest stand dominated by Castanea sativa, Fagus orientalis and Pinus nigra ssp. pallasiana in Bursa Province, Turkey. Soil samples were taken from burned and unburned (control) sites in three periods: December 2011, July 2012, and November 2013. Samples were analyzed to determine some chemical and biological properties in the soil. We tested the effect of fire and period on each variable by two-way ANOVA analysis. The results indicated that Nt and OM were not affected by fire, while C / N ratio decreased. The difference between the periods was significant as regards OM and acid phosphatase enzyme activity. Fire resulted in a significant increase in soil pH, Ca, Mg and no significant change in P2O5. Although we found that surface fires limited the effect on soil properties, we concluded that there might be positive interactions between increased available nutrients in the soil and the burning of soil with relatively low severity. Prescribed fire can be proposed as a management tool to mitigate fire risks and short-time enrichment of available soil nutrients in these ecosystems. 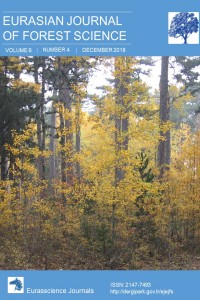