The purpose of the research will be to provide the teaching of moral dilemmas in the fairness value of students. In addition, students’ optinions on fair value were taken in the study. The research was carried out with 48 students in two branches (7 / A and 7 / B branches) of seventh grade students studying in a secondary school of the Ministry of National Education in the 2014-2015 academic year. The teaching technique was applied to the students of the experimental group of the research in order to gain fairness value through moral judgments about the moral dilemma approach. The normal training process was continued under the control group. Fairness Scale and Moral Dilemma Test were applied. In addition, the Interview Form was applied to the experimental group. In analyzing the data of the research, t-test and descriptive analysis are made. According to the results of the study, according to the moral reasoning approach, the experimental group, whose values were taught with dilemmas, continued the normal training process compared to the control group. 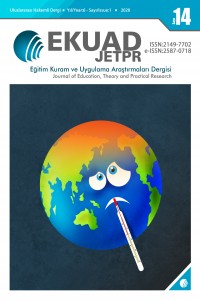