European Journal of Research in Dentistry

A Pilot Study for the Aerosol Capture, One Center Test Results

Objective: In the present study, showing the efficiacy of aerosol capture systems used in dentistry was aimed. For this purpose, Aerosol Control System (ACS) (Nederman, Sweden) was used in capturing the aerosols during the dental treatments. Methods: Aerosol capture studies were conducted by Aerosol Control System (Nederman, Sweden). The measurements were divided to three groups. The first group is the reference group in which the Reference Value Readings were recorded. The RVR data were recorded in the treatment area where the dental staff and the patient were in the clinic, but no treatment protocol. The second group consist of the Aerosol Concentration Readings during the treatment, mentioned before, but the ACS was off. The third group had the Aerosol Concentration Readings during treatment when the ACS was on. Results: 16 records in 2986 samples were measured. For the reference group, particle concentration average was 47 (ng/m3), whereas for the second and for the third groups, they were 119(ng/m3) and 53,6 (ng/m3), respectively. Conclusion: It was observed that the aerosol concentration is increased dramatically during the operations when the system is off but came close to the reference records when the aerosol control system was turned on. When the system is off, the aerosols that accumulated on the glasses, masks and protective equipment of the dentists were examined. These also showed the effect of the spread of the aerosols during the treatment. 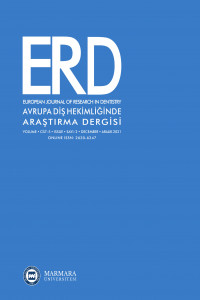