The nature of parent material that makes up a soil significantly affects the formation of soil and the availability of nutrients. This study aimed to determine changes in some physicochemical properties of soils formed on magmatic, metamorphic and sedimentary rocks located in Sandıklı District of Afyon province and to compare geochemical properties. The variability in the physicochemical properties of the soils whose land use types are pasture and dry farming were determined the highest in the soils formed on metamorphic and the lowest sedimentary rocks. Soils on sedimentary rocks have usually high in lime content and have a slightly alkaline reaction and rich in basic cations. In sedimentary rocks, a very strong relationship between clay and field capacity and wilting point was determined (r: 0.93;0.89; p<0.001). It was also found that Fe content showed a significantly positive directional relationship with clay (r: 0.71) and the wilting point (r: 0.75). In soils formed on magmatic rocks, the wilting point (0.78; p<0.001) and sand (-0.77; p<0.001) showed a significant high relationship with Mg. In soils that formed on metamorphic rocks, a strong, positive correlation was determined with sand and Fe content with other soil properties and negative directional, changeable cations and field capacity and wilting point. P2O5 in soils formed on magmatic rocks, CaO in sediments, and SiO2 content in metamorphic showed statistically significant changes compared to other soil groups (p<0.01). In general, the effects of land use and parent material on basic soil properties were found to be statistically significant. In major oxides, the bedrock effect was found to be statistically significant (p<0.01) and the land use effect was statistically insignificant. As a result of the study, it was found that the parent material, which is one of the factors that make up the soil under semi-arid ecological conditions, shows significant differences in soil properties. 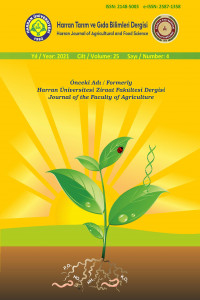