In this research, some physical and chemical properties of the biocomposite obtained from synthesized epoxy modified palm oil (MPO) and epoxy resin have been characterized. The experimental study plan is made according to Response Surface Methodology (RSM) and biocomposites with different MPO rates are obtained. The chemical bond structure of MPO and epoxy biocomposite has been evaluated with Fourier Transform Infrared Spektrofotometre (FTIR). The experimental, and RSM model results obtained, the density of the biocomposite rise as the MPO rate increases. It is determined that the Shore D hardness of the biocomposite is inversely proportional to the MPO rate by mass. The thermal conductivity coefficient and thermal stability also rise with the rate of MPO (wt.%) in the biocomposite. In the thermal degradation experiments of the obtained biocomposite, it is observed that the thermal stability of the composite goes up as the MPO rate rises. Activation energies are calculated using the Flynn Wall Ozawa, Kissinger, and Coats Redfern models. The activation energies calculated for the 9th, 2nd, and 13th experiments according to the Flynn Wall Ozawa method are approximately 139.65, 143.56, and 145.28 kJ/mol, respectively. The function with the highest R2 value has been determined according to the Coats Redfern method, and the deviation in Flynn Wall Ozawa and Kissinger model results was below 7%. 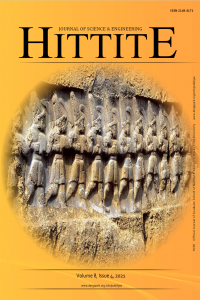