Inonu University Journal of the Faculty of Education

The aim of this study is to examine the university students’ marriage expectation. The students were classified as idealistic, pessimistic and realistic. The sample of the study was formed according to convenient sampling method. The students were aged between 18 and 24 (x̄=20.4, SD=1.6), of which 191 (64.4%) were female and 101 (36.6%) were male, totaling to 292. The students were attending to three differnt departments, namely, English Teaching, Arts and Craft Teaching, and Physics Teaching at the Faculty of Education at Dokuz Eylul University. In the study, “Marriage Expecttation Scale (MES)” was adapted by Öz Soysal, Uz Baş and Aysan was applied to Turkish developed by Jones and Nelson. After the application, the scores of the participants were graded according to realistic, pessimistic and idealistic scores. A total of thirty people, ten of the participants in each group, were selected by lot. Later researchers conducted semi-structured interviews. The findings of the research show that individuals with idealistic, pessimistic and realistic expectations differ in their love relationship, conflict resolution, child care and housework, and family relationships. The factors affecting the expectations of all participants are similar. it is thought that it will be useful to take these variables with, origin family, belief and cognitive structure, attachment style, social learning, effect of the media and and pre-marriage psychoeducation and group psychological counseling studies. 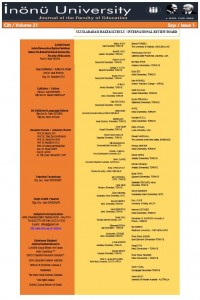