In this study, the orientation of two different predator species [(Coccinella septempunctata L., Hippodamia variegata (Goeze) (Coleoptera: Coccinellidae)) to two different aphids [Aphis fabae Scopoli and Acyrthosiphon pisum Harris (Hemiptera: Aphididae)] was investigated. Y-type olfactometer which was made of glass material with one entrance and two exit openings was used in the study. Different applications were applied to the exit ends of the olfactometer and the orientation of the predators dropped from the entrance end was examined. Individuals passing the marked area (10 cm) on the olfactometer were considered to have turned to that plant. All of the trials were conducted separately for each predator and prey with 10 replications. The counts of the insects advancing on the arms of the olfactometer were made 1, 4 and 8 hours after the release. When looking at the data obtained in the first stage of the study, it was determined that the predator insects mostly gravitate towards the leaves infected with aphids; In the second stage, it was observed that C. septempunctata individuals mostly turned towards the side that was contaminated with A. pisum, and H. variegata individuals mostly turned towards the side that was contaminated with A.fabae. When looking at the data obtained from the study, it was determined that the plants damaged by herbivorous insects show an attractive feature for predators. Accordingly, it was concluded that chemicals obtained from broad bean plants damaged by aphids should be analyzed. 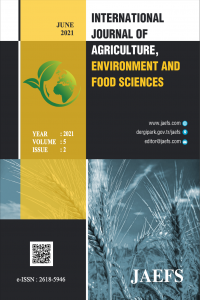