alphabet without obstacles. If those obstacles are known to researchers and if they

investigate in them and obtain cultural results, the latter can become a scientific

fundament so that step by step the formal Kurdish writing can be built on. Each of

both alphabets the Kurds have for writing, whether the Arabic or the Latin letters of

the alphabet are used, has its obstacles and shortcomings. It is possible to resolve

to adjust and conform those with the unique needs of the Kurdish language.

This thesis called “Standard Language, Phonology and Alphabet” is about the stan-dardization of the language and its relation to phonology and writing. In addition,

made. There are some notes registered about writing, as well. The research is a

methods whenever needed. This thesis is a descriptive analysis and has not been

influenced by any historical events. 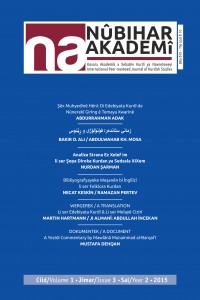