Aim:The study aimed to present the results of our universal newborn hearing screening results at a secondary care hospital in Mardin by ABR and review with the literature. Materials and method: A total of 7134 newborns were screened between January 2021 and December 2021using ABR as first, second, third steps. Newborns who failed and at risk are referred to reference hospital and the results were obtained from the records. Result:Of the 7134 newborns,6179 are first test, 955 were retested. Failure in first test was 13.3%. 235(3.2%) of patients were referred to reference center. 0.5% were referred due to test failure, 2.7% were referred due to risk. 27 patients(3.7%) were obtained from records of reference center as abnormal results in clinical Automated Brain stem Response(ABR).16 of them (0.5%) were congenital hearing loss(CHL) who need rehabilitation. Conclusion: Incidence of hearing loss and the rate of failure in first and second test were consistent with the literature. However, reference rate increased due to reference caused by risk factors. 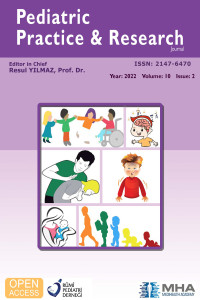