Objective: Although the factors affecting emergence agitation (EA) have been examined in the literature, the literature evaluating the effect of obesity on postoperative EA in children is limited. In this study, we aimed to evaluate whether obesity has an effect on postoperative EA. Material and method: The medical records of patients aged 2-14 years, with ASA I-II physical status and undergoing elective surgery were reviewed (November 2018 and November 2022). Patients who underwent emergency surgery or who used an anesthetic agent other than sevoflurane for the maintenance of anesthesia were excluded from the study. Patients will be divided into 3 groups according to their body mass index; Group 1; Normal (5th to 85% percentile), Group 2; Overweight (85-95% percentile), Group 3; Obese (95th percentile and above). Emergence agitation was assessed by anesthesiologists using the Watcha scale. Results: 567 patients were included in the study and EA occurred in 115 (20.3%) of them. Of the patients, 428 were considered normal, 64 were overweight and 75 were obese. When demographic data were compared, there was no statistical difference between the groups. EA incidence was statistically higher in Group II (28.1%) and Group III (29.3%)compared to Group I (17.5%) (p=0.006). Conclusion: In conclusion, we are of the opinion that both overweight and obesity increase the incidence of EA in children undergoing general anesthesia, but prospective further studies are also required. 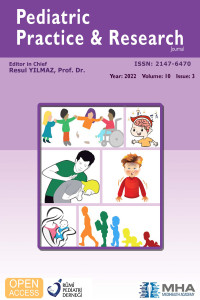