The aim of this study is to reveal the active and passive participation profile of sports determined in Turkey. Within the scope of the research, 28 provinces were determined based on
the Turkish Statistics Regional Unit Classification, using Stratified Sampling and face to face interviews were made with 3555 people. The theories related to the sport participation profile
which were examined in detail within the scope of the research, and the “Sport Participation Scale” which was created on the basis of models. Descriptive Research model was used in this
study. Depending on the findings of the research, it can be stated that Turkish people do not perform regular sports in general and they do not have active sports consumption although they have 3-5 hours of free time per day. When analysing of leisure time forms, it is seen that the Turkish people spend most of their time by using computer and watching television. In sports
participation, it was determined that younger people tend to participate more in sportive activities compared to older individuals and also married people do less sports than single individuals. 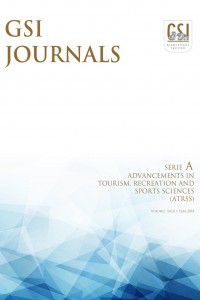