Objective: Allergic reactions to food are among the major food safety concerns in especially industrialized countries. The primary treatment for food allergy is avoidance of the allergen food. Investigation of allergens in food products is important in terms of ensuring food safety and protecting consumer health. In this study, it was aimed to determine the allergenic proteins in several food matrices using the proteomics technique and to investigate their stability after heat treatment. Materials and methods: Hazelnut, almond, walnut, pistachio and sesame were used as material. After protein extraction and enzymatic digestion, unroasted samples were analyzed by liquid chromatography quadrupole time-of-flight mass spectrometry (LC-Q-TOF/MS). Firstly, specific allergen peptides were determined in unroasted samples with the help of MS/MS data and databases. After roasting of samples at 130°C, 150°C and 170°C up to 30 minutes, stability of allergen peptides was investigated. Discussion and conclusion: After roasting at different time intervals and temperatures, the mass spectrum of the samples were examined in the database and it was observed that some peptide sequences lost their stability, while others continued to exist. Two peptide sequences were determined as markers for hazelnut, almond, walnut, pistachio and sesame, which maintain their stability after roasting. 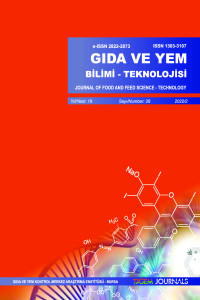