Spatiotemporal Change Detection of the Linden Forests in Bursa, Turkey

Nonwood forest products potentially provide many economic, social and environmental benefits in Turkey. Increasing public demand for nonwood forest products has led to the development of spatial planning and updating of existing plans. In order to ensure the sustainable management of nonwood forest products, their trends and spatial distributions by time can be estimated by using land use/land cover change detection approach. The Linden is one of the most important nonwood forest products in Turkey and the most widespread distribution of linden is located in the province of Bursa. In this study, it was aimed to determine the spatiotemporal changes of one of the world's largest linden forests in Yeniköy Forestry Enterprise Chief within the border of Bursa Forestry Regional Directorate. Change detection analysis was applied to Landsat 5 TM image and Landsat 8 OLI/TIRS image captured in August 2008 and in July 2017, respectively. The spatiotemporal change detection was implemented on these two images by using various digital image processing techniques (pre-processing, classification, post-processing, and change detection) through ERDAS Imagine 2015, ArcGIS 10.5, and ENVI 5.3 program. The supervised classification, applied on both images using ERDAS Imagine 2015 program, revealed that there were six significant land use/land cover types in the study area; linden, other deciduous trees, wetlands, swamp, sand, and other lands (settlements, agriculture, open areas). The results indicated that there was increase in the areas of wetlands, sand, and other lands, while the area of linden forest, other deciduous trees, and swamp decreased from 2008 to 2017. According to the accuracy assessment results, the classification processes applied on 2008 and 2017 images provided overall accuracy of 84.38% and 82.81%, respectively. It is determined that some of the linden forests have been converted into residential areas and farmlands to grow crops. 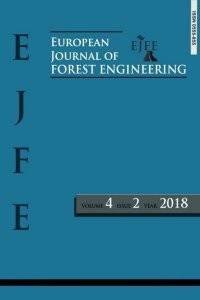