In Turkey, forest areas located along the coastline of the Marmara, the Aegean and the Mediterranean regions are very sensitive to fire. As a result of forest fires, about 10000 hectares of forest area is damaged annually. One of the key elements in firefighting is early detection and quick intervention. In order to achieve this goal, first of all, the forest areas with fire risk should be determined especially for fire sensitive forest areas. The forest fire risk can be evaluated considering various risk factors such as stand structures, topographic factors, proximity to some features (roads, settlements, and water resources), and climatic factors. In this study, GIS techniques and Analytic Hierarchy Process (AHP) method was used to produce forest fire risk map for the first degree fire sensitive forest land located in Bodrum province of Muğla in Turkey. The results indicated that 11.83% and 21.98% of the forest area was categorized as very high and high fire risk, respectively, while 22.28% and 25.93% was moderate and low fire risk, respectively. The fire risk was found to be very low at the rest of the study area (17.98%). To compare the fire risk map with actual forest fire occurrences in the study area, it was overlapped with the fire map indicating forest components where previous forest fires (>1.0 ha) occurred in the study area in last five years. It was found that 38.32% of the areas damaged by the previous fires were categorized as high and very high fire risks zones in fire risk map, while 28.44% was moderate fire risk zones. The result showed that tree species was the most effective risk factor, followed by tree stages and proximity to water resources. This study revealed that the combination of GIS techniques and AHP method is very advantageous approach to map forest areas with fire risk in short time. 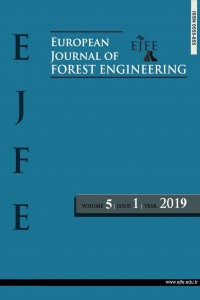