The question of how observable variables should be associated with latent structures has been at the center of the area of psychometrics. A recently proposed alternative model to the traditional factor retention methods is called Exploratory Graph Analysis (EGA). This method belongs to the broader family of network psychometrics which assumes that the associations between observed variables are caused by a system in which variables have direct and potentially causal interaction. This method approaches the psychological data in an exploratory manner and enables the visualization of the relationships between variables and allocation of variables to the dimensions in a deterministic manner. In this regard, the aim of this study was set as comparing the EGA with traditional factor retention methods when the data is unidimensional and items are constructed with polytomous response format. For this investigation, simulated data sets were used and three different conditions were manipulated: the sample size (250, 500, 1000 and 3000), the number of items (5, 10, 20) and internal consistency of the scale (α = 0.7 and α = 0.9). The results revealed that EGA is a robust method especially when used with graphical least absolute shrinkage and selection operator (GLASSO) algorithm and provides better performance in the retention of a true number of dimension than Kaiser's rule and yields comparable results with the other traditional factor retention methods (optimal coordinates, acceleration factor and Horn's parallel analysis) under some conditions. These results were discussed based on the existing literature and some suggestions were given for future studies. 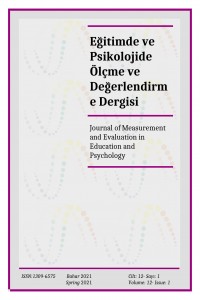