The Potential of Halal Tourism in Ethiopia: Opportunities, Challenges and Prospects

Recently, Halal tourism has been emerging as lucrative tourism niche both in Muslim and non-Muslim Countries’ destinations. For a long time, tourism industry had been exclusive against Muslims for it was fenced by the so called “Haram” activities. However, nowadays, this problem is being solved through Halal tourism so that more Muslims are engaging in tourism without sacrificing their religion. Countries such as Malaysia, Turkey, Indonesia and Singapore have already entered into Halal tourism. Though Halal tourism is open for both Muslim and non-Muslim customers, stakeholders including scholars in the field have developed a misconception that Halal tourism is only for Muslims. However, in practice, it is compliant with Sharia but open for all. No doubting, Ethiopia can be among the top beneficiaries of Halal tourism developments. Its history as a land of the first Hijra and her geopolitical position for Islamic world enable her to capture the halal tourists’ demand of the Islamic world.  In this paper, literatures and previous researches in the area have been analyzed. Both opportunities and challenges that Ethiopia will be facing in implementing halal tourism have also been inventoried and analyzed. Accordingly, the applicability of Halal tourism in Ethiopian context has been well appraised.

The impacts of armed conflicts on the heritage tourism of Dessie and its environs, Northern Ethiopia

The contestation of the meaning of halal tourism

Good Idea But Not Here! A Pilot Study of Swedish Tourism Stakeholders’ Perceptions of Halal Tourism 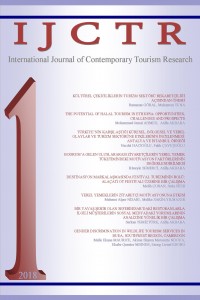