Journal of Health Systems and Policies

Diagnostic Related Groups (DRG) is used to classify patients / cases that have similar services in the treatment as they have similar diagnoses. The costs of the DRG cases are represented by a numerical value called "relative value". Initially developed for grouping hospital costs on the basis of diagnosis, DRG started to be taken as reference widely by insurance companies in the case based payment model. The first study about the DRG in Turkey is initiated in 2005 with public-university cooperation and has carved an important role in the global budget implementation of Ministry of Health (MoH) since 2009 using the Australian DRG model. However, any work related to the DRG in the private health insurance sector in Turkey has not been conducted. The payments of private hospitals by the private insurance companies are based on the pay for service payment model and the service prices are calculated mostly considering the minimum wage tariffs of the Turkish Physicians Association (TPA). Although some arrangements are done on the relative values by the MoH regarding the wages in the public sector; there has been no study of how the relative values ​​are in line with the prices in private hospitals. This study aims to measure the correlation between the DRG relative values of Turkey and the health care service prices that private hospitals charge to private health insurance companies. The data set, gathered by CompuGroup Medical in a TUBITAK project includes the damage files and their corresponding DRGs. The correlation between damage amounts and relative values of 2.144 files is measured as 0,41. Secondly, the correlation between the average damage amounts of the 235 DRGs and the relative value was also measured as 0.43. Thus, the relationship between the health care service prices of the private hospitals charged to private insurance companies and the DRG relative values ​​used by the MoH has been measured to be weak. 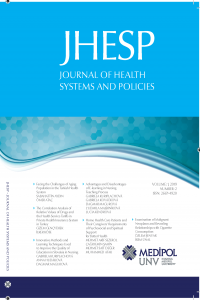