Journal of the Turkish Chemical Society Section B: Chemical Engineering

Bubbling fluidized bed gasifier has many advantages for biomass gasification process. In this study, exergy and energy analysis were investigated for gasification of almond shell in bubbling fluidized bed gasifier by using Aspen Plus simulation. Aspen Plus works based on principle of Gibbs free energy minimization. The effect of temperature and steam/fuel ratio, which are important parameters for the gasification process, on energy and physical exergy values of syngas were examined. The results of the simulation showed that the exergy and energy values of the syngas were significantly affected by the change in gasifier temperature and steam/fuel ratio. Increasing the steam/fuel ratio influenced the energy and exergy value negatively. However, H2 and CO compositions in the syngas and energy and exergy values of the syngas increased with the enhancement of temperature. The developed bubbling fluidized bed gasifier model will create knowledge for researchers interested in the gasifier process. 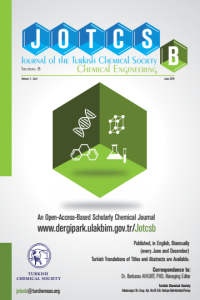 This piece of scholarly information is licensed under Creative Commons Atıf-GayriTicari-AynıLisanslaPaylaş 4.0 Uluslararası Lisansı.