The Anti-Causal Discourse of Abū al-Ḥassan al-Ash‘arī: the Theory of Habit

The causality in Kalâm subjects the relationship between cause and result. Whether it is connected with the events in nature, or connected with the relationship between Allah and the world, whether the relation between cause and result is compulsory or not is discussed with the scope of causality. According to naturalist thinkers, there is a nature in every object and all events in the universe take place in accordance with these natures. It is stated that, in the theory of custom, it is concluded that there is no obligation in the cause-effect relationship in all events occurring in nature and that there is a relationship only as a result of our habits. In this study, it is discussed in the context of Abu'l-Hasan al-Ash’arî's views whether the events in nature present a necessity both among themselves and in their relations with Allah Teâla. Ash’arî criticizes the notion that the events taking place in nature occur as a result of a certain nature direction or the i'timāds of objects, on the grounds that it evokes causality. According to him, all events taking place in nature occur by direct and voluntary direct creation of Allah. It is not necessary for certain results to be realized as a result of certain reasons, on the contrary, the approach that results in this way stems from human habits. Al-Ash'ari and his follower theologians object to the existence of uncertainty or irregularity in natural phenomena, as well as the notion of causality that causes the result of necessity. As Ash’ari and his follower theologians oppose the existence of uncertainty or disorder in the natural events, they also object to the view of causation that necessarily causes the result. 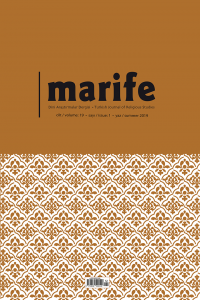