In this study, monthly change of the heavy metal composition of tellina (Donax trunculus Linnaeus, 1758) from Kefken territory on the Black Sea coast between 2013 and 2014 was investigated. Heavy metal analysis was determined by ICP-OES. Mercury (Hg) and tin (Sn) were not detected during the period of 12 months. Lead (Pb) was detected in November, December, January, February, and March and it was calculated as 12.97 μg/g on average. The highest amount of lead was detected in December as 16.08±0.82 μg/g. The amounts of cadmium (Cd), cobalt (Co) and nickel (Ni) were determined between November and April and it was seen that they had average values such as 0.45 μg/g Cd, 0.91 μg/g Co and 4.46 μg/g Ni. Chrome was detected during the 12 months and it was calculated as 4.19 μg/g on average. The highest and the lowest amounts of chrome were detected in January as 16.71±2.11 and August as 0.70±0.05, respectively. In addition, it was seen that during the period this study was held, between 2013 and 2014, there were dramatic temperature changes and the instant temperature changes positively affected the accumulation of heavy metal in the species. Despite the fact that the instant temperature changes positively affect the accumulation of heavy metals in the live metabolism, it is better to handle the subject regarding the effects of global warming on living things. It is possible to say that tellina can be consumed as food in convenient times. In respect of the detections in this study, it can be said that tellina can be conveniently consumed between April and October depending on the territory. 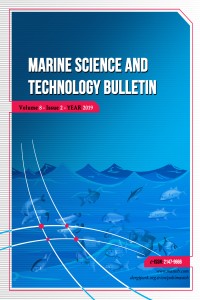