The Pacific oyster (Crassostrea gigas) has a very important economic potential for aquaculture, but on the other hand, is among the highly invasive species in the world and within the Mediterranean ecosystem. In the 1960s, C. gigas was brought to Europe for aquaculture in the Mediterranean and Black Sea regions from Japan and Canada. The Turkish waters are the part of the Mediterranean Sea, which is the world’s most invaded sea. The invasion of alien species results from marine transportation and aquaculture activities of non-native species. A heavy maritime traffic is also present in the Marmara Sea, which connects the Black Sea and Mediterranean Sea. The identification of the invasive species and their distributions is very prominent in terms of protecting natural habitat and monitoring the effects of invasive species. In this study, 30 individuals, morphologically identified as C. gigas, were collected from Bandırma bay. The genomic DNAs were extracted from each sample’s muscle tissue using universal salt extraction method. Partial sequences of COI and 16S Mitochondrial DNA loci of the sample DNAs were obtained for species identification. The sequences were searched against the database and results were retrieved from BLAST. All the sequences obtained in this study showed significant similarity with the C. gigas sequences present in the database (E=0). The sample sequences resulted in 9 different haplotypes for the COI locus (hd: 0.5296 and variance: 0.01256±0.112) and 5 different haplotypes for the 16S rDNA locus (hd: 0.2529, Variance: 0.01076±0.104). The results of this study provided the first molecular evidence for the presence of non-native Pacific oyster individuals in the Marmara Sea. 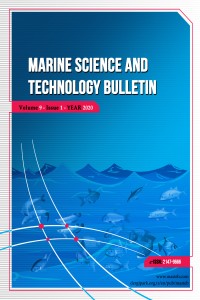