Salep represented by 170 taxa, 30 of which are endemic in Turkey not only is an important part of genetic plant diversity, but also contains economically and commercially valuable species. Although salep is covered by “International Convention on Trade in Endangered Species of Wild Fauna and Flora (CITES)”, millions of salep plants are disrooted every year to produce salep. Salep derived from the plants are used in the food sector including primarily the ice-cream industry. Despite its high economic value, cultivation activities are still ongoing. Weed control is an important factor that is encountered during cultivation and increases the costs significantly. In this study, both mechanical and chemical weed control methods in salep cultivation were explored and an effort was undertaken to identify a cheap and effective cultivation method. The trials were conducted in 2010 in İzmir-Menemen under field conditions. Stinging nettle (Urtica urens L.), dead nettle (Stellaria media L.), wild oat grass (Avena futua L.) and shepherd’s purse (Capsella bursa pastoris L.) represented 84% of the species found in the study area with respect to density. An effort was undertaken to determine the effectiveness of chemical control using different herbicides for weeds. To this end, three iterations of seven treatments including Lenacil (Adol), Bentazon (Basagran), Acetochlor (Cengaver), Aclonifen (Challenge), Pendimethalin (Herbimat), Trifluralin (Treflan) in the recommended doses and the control were applied before germination following the planting of tubers on the 3rd week of September 2010. Following the application, it was found that Lenacil was ineffective, Bentazon had an effectiveness of 54%, Trifluralin 71%, Acetochlor 95%, Aclonifen 97%, Pendimethalin 93% in reducing the amount of weeds per square meter compared to the control. Furthermore, Trifluralin, Acetochlor and Aclonifen were observed to have a negative effect on the development of salep, and Pendimethalin was found to be the most effective substance with respect to both weed control and normal development of salep. Chemical control was found to be cheaper and more effective compared to the mechanical control method. 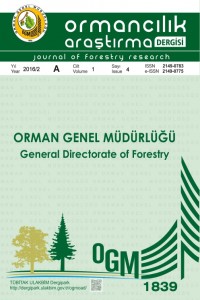