Archives of Clinical and Experimental Medicine

Aim: Prevalence of night eating syndrome (NES) is higher in obese people. The effect of bariatric surgery on preoperative and postoperative eating disorders of obese patients remains controversial. This study aims to determine the preoperative and postoperative NES in patients who underwent bariatric surgery and the impact of surgery on this syndrome. Methods: The study was conducted on 29 patients who applied for bariatric surgery at a university hospital to treat morbid obesity. The questionnaire used as a data collection tool included the participants' sociodemographic characteristics, anthropometric measurements, and the Night Eating Questionnaire (NEQ) elements. Groups with and without improvement in NES status with bariatric surgery were formed, and the groups were compared according to the other parameters. The relationship between night eating disorder, demographic characteristics, and anthropometric measurements were also evaluated. Results: Bariatric surgery was promising in the entire group, the mean preoperative body mass index in the entire group was 42.9 ± 5.56 kg/m2, and the mean postoperative 1st-year body mass index was 28.5 ± 5.98 kg/m2. When NEQ was evaluated, it was seen that 27.6% of the patients had NES before the surgery and 10.3% after the surgery. It was found that only smoking had a negative effect on the improvement in NES (p=0.045), while other parameters did not have significant effects (p>0.05). Conclusion: It has been observed that bariatric surgery positively affects NES. Although smoking negatively affects the improvement in NES, studies with larger samples are needed to evaluate these and other parameters more effectively 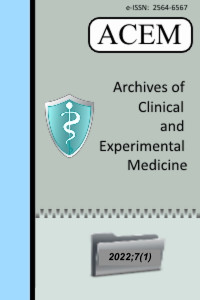 ACEM is hosted by TUBITAK DergiPark, and is licensed under a Creative Commons Attribution-NonCommercial-NoDerivatives 4.0 International License.