Early childhood in human life is a period requiring intense and diligent care. Within this period, children and youngsters are quite sensitive to both physical diseases and psychological disturbances. In developing countries such as Turkey, it is generally thought that the main problem of the children is meeting their physical needs. Whereas, a child must be observed as a whole in every aspect and in every field of the development, a child must be served. (Adana, 2004). Cognitive development is one of the main examination fields in human development. The word “cognition” is employed to explain the development of the processes such as the child’s recognition of the world, understanding, learning, recollecting what has been learned, structures effecting the recollection, problem-solving and perception. One of the main examination fields is the social development. Social developement is in early chilhood, youth and adulthood the individual itself to show expected behaviour, learn to control unwanted behaviour and decrease to minimum level, keep himself off from unaccepted behaviours in public, make the accepted behaviours into habits. Because of the preschool education is a critical period for positive social skills developement, skills that gained to the child can provide child to be more successfull individual in further life. In this period, it has been observed the child that supported healthfully as cognitive and socially, affects his/hers further life positively as accordance level and success level. Therefore in this study, the cognitive developement features and social skills in 6 year old kids that continious to an educational institution. In this study, correlational model form scanning models has been used. The study gourp is formed with 173, 6 year old kids that study in 2012-2013 educational year in Konya province in pre-school education institutions that is related to MEB in low-high socio economic group. Relational screening model was used in the research. As data collecting instruments, Personal Information Form, Cognitive Development Assessment Form and Social Skills Assessment Scale were used. The data were analysed by means of SPSS 16.0 statistical package programme. In analysing the data, Pearson Product-Moment Correlation Coefficient Analysis and Simple Linear Regression methods were used. The level of significance was accepted as 0,01 in statistical comparisons. As a result; that there is a direct relation between kids cognitive skills and social skills and also cognitive developement is effective in developing social skills can be said 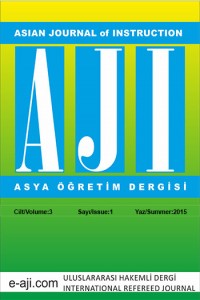