This paper examines the transfer of the power generated by the photovoltaic (PV) system to the three-phase alternating current (AC) power grid with maximum efficiency by controlling in two stages. With the designed PV system, it is aimed to transfer the energy received from the source with high efficiency to the network by using the maximum power point tracking (MPPT) method in order to ensure power stability. In addition, with a second control mechanism, the current at the output of the inverter is instantly controlled and the voltage value of the generated power is kept constant. Thanks to this control system, solar energy has been kept under control from electrical energy generation to its transfer to the power grid. In order to predict the quality of the generated power, the total harmonic distortion (THD) rate of the current at the output of the PV system was determined as a result of the simulations made in the computer environment. It is seen that the simulated PV system, according to the values of different solar radiation levels, tends to keep the voltage value of the power to be transferred to the grid constant at the desired level and that the THD value has been reduced below three percent at the time of maximum power generation. 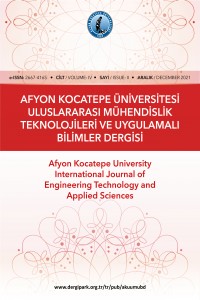