Cordierite based glass-ceramics are engineering materials with high thermal resistance properties, as well as low dielectric constant and low thermal expansion coefficient. Cordierite glass-ceramics can be produced at low costs and have good electrical properties. They can be used as a substrate instead of alumina in the electronics sector, as well as an alternative material in the production of multilayer circuit boards, catalytic converters, and thermal insulation materials. Since cordierite based glasses have a narrow sintering temperature range and high viscosity, it is difficult for them to be crystallized below 1000 °C without a nucleation catalyst. For the production of low temperature and high-density glass-ceramics, it is crucial to select the additives (ZrO2, TiO2, CeO2, Y2O3, CaO, ZnO, P2O5, B2O3, etc.) and their amounts that have the fluxing properties that reduce viscosity and provide nucleation. In this study, the effects of colemanite addition on the crystallization ability after vitrification of mixtures prepared in a composition suitable for cordierite stoichiometry were investigated. Colemanite at 0, 1, 2 and 3 wt. % ratios were added to the mixtures of magnesia, kaolin, and quartz raw materials were melted at 1500 °C in industrial conditions, and then glass structure was obtained by sudden cooling. Glass transition (Tg) and crystallization (Tc) temperatures of glass powders obtained by crushing and grinding were determined by thermal analysis technique. The changes in the phase structure of glass-ceramic after sintering at 1000 °C were examined. 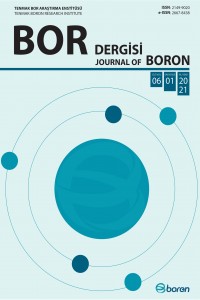