Performance Analysis of a Harvester during Timber Extraction Activities in Bursa, Turkey

In Turkey, the use of mechanized harvesting technology in forestry has recently increased due to demands of private forest industry for large amounts of woods. In order to implement these systems effectively and efficiently, their applications should be well planned considering the factors that affect the performance of harvesting equipment. Performances of the mechanized harvesting systems are mainly influenced by factors such as tree size, tree formations, terrain conditions, operator motivation and skills. In this study, a single-grip harvesting operation was evaluated by using time and motion study analysis. Also, the main factors that affect harvesting operation were evaluated using statistical analysis. The study was implemented during a clear-cut operation in Brutian pine (Pinus brutia) stands located in Osmangazi Forest Enterprise Directorate in the city of Bursa, Turkey. Three stages of harvesting operation were evaluated; harvester moving to the trees, grabbing and felling trees, and processing (i.e. delimbing and bucking) trees. The average time of the work stages was examined, and the results indicated that most of the time was spent on tree processing. The productivity of the harvesting operation was found to be 24 m3/hr ranging between 6 m3/hr to 57 m3/hr. This productivity was mostly affected by the tree size, which directly influenced the total processing time of the felled trees in the study area. According to the statistical analysis results, it was found that there is a significant relationship between tree volume and the time spent on tree processing stage. The results from this study cannot be generalized but it suggests that mechanized harvesting using a harvester should be well planned ahead taking into considering the volume and size of the felled material in order to operate the harvester with optimal efficiency. Optimum machines and configurations should be selected based on machine specifications and stand characteristics. 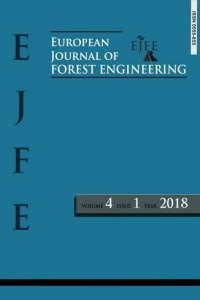