Planning of forest transportation is a complex problem that requires effective and harmonious design and implementation of various forest operations including extraction, loading, and hauling of forest products. These operations constitute a significant part of the total cost of producing forest products; therefore, developing the most appropriate (minimum cost/maximum net profit) transportation plan has increasing importance for the economic aspect. Computer-aided models can be used to plan the transportation of forest products and systematically searching for the most suitable solution. In this study, a network analysis-based Network 2000 program was used to determine the optimum routes with minimum forest operation costs and maximum net profit of forest products considering two logging truck types (medium and large size). In the solution process, two farm tractors (4x2 and 4x4) for extraction operation and two loaders (tracked and rubber-tired) for loading operation were evaluated. The alternative with the minimum cost was determined using the Network 2000 program. The study was implemented in Kınık Forest Enterprise Chief (FEC) located in the city of Bursa in Turkey, while considering five landing areas where various forest products (i.e. log, mine poles, industrial wood, and paper wood) were extracted from the six harvesting units and hauled to two forest depots. In the study, the optimum solution was searched for two scenarios where only the forest depot which is commonly used in the Kınık FEC was considered in the first scenario while the forest depot of the neighboring enterprise in the region was also evaluated in the second scenario. The results obtained from the first scenario indicated that using large-size tractor reduced the hauling cost by 8% which led to over 1000 TRY reduction in the total cost of forest operations. The hauling cost and total forest operation cost obtained in the second scenario was about 16% and 2% less than that of the cost obtained in the first scenario for the case of large-size truck. On the other hand, total net profit of the forest products received in the second scenario was about 35000 TRY more than that of the net profit received in the first scenario for the case of large-size truck. The optimum farm tractor for skidding operation was successfully selected by the Network 2000 program considering terrain conditions in the harvesting unit and availability of the equipment. Likewise, optimum loader was also determined by considering distribution of the forest products on the landing areas. 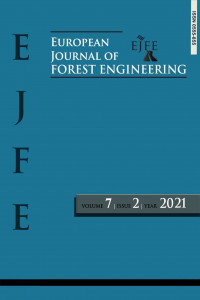