Fluoride contamination has now become an emerging concern in agroecosystems. A diagnostic survey was conducted across the fluoride (F-) contaminated wetlands of Kuttanad, India with an aim to examine the influence of edaphic factors on F- concentration in soils. The soils (Inceptisols) predominantly sandy had a substantial percentage of clay and the soil characteristics such as bulk density (BD), moisture, temperature, pH, electrical conductivity (EC), cation exchange capacity (CEC) and organic carbon (OC) varied with soils. Similarly, the soil nutrients (NPK) and the oxides of Fe and Al as well as total sesquioxide differed with soils. Principal component analysis (PCA) revealed that the first two components (PC1 and PC2) significantly explained the variability existed in the data while the third component (PC3) did not explain any variation compared to the first two components. PC1, PC2 and PC3 accounted for 52.2%, 12.7% and 11.3% of the variation in the profiles respectively. Out of soil samples, 53% had a similar distribution of soil characteristics and F- concentration and are grouped together in PC1 while, the remaining 47% of the samples had a similar distribution of characteristics and are grouped together in PC2. Among the soil characteristics examined, silt content, pH, EC, CEC, OC, N and P had a significant (P<0.001) positive association along PC1 indicating that these factors are contributing to the augmentation of F- concentration in the wetlands of Kuttanad. 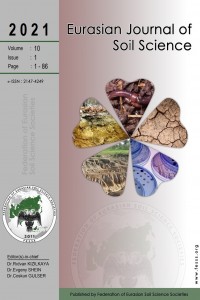