Performances of MIMIC and Logistic Regression Procedures in Detecting DIF

In this study, differential item functioning (DIF) detection performances of multiple indicators, multiple causes (MIMIC) and logistic regression (LR) methods for dichotomous data were investigated. Performances of these two methods were compared by calculating the Type I error rates and power for each simulation condition. Conditions covered in the study were: sample size (2000 and 4000 respondents), ability distribution of focal group [N(0, 1) and N(-0.5, 1)], and the percentage of items with DIF (10% and 20%). Ability distributions of the respondents in the reference group [N(0, 1)], ratio of focal group to reference group (1:1), test length (30 items), and variation in difficulty parameters between groups for the items that contain DIF (0.6) were the conditions that were held constant. When the two methods were compared according to their Type I error rates, it was concluded that the change in sample size was more effective for MIMIC method. On the other hand, the change in the percentage of items with DIF was more effective for LR. When the two methods were compared according to their power, the most effective variable for both methods was the sample size. 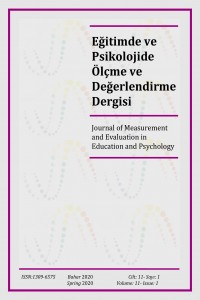