An Alternative To Likert Scale: Emoji

In the twenty-first century, the wide use of emojis in communication platforms has emerged. As a result, emojis have started to be used in scales. However, there are a limited number of studies in the literature that focuses on the effect of using emojis instead of Likert-type response categories in scales. Therefore, the focus of this study is to examine the differences that may arise from using emoji and Likert-type response categories in scales. For this purpose, the 3, 5, and 7-point Likert-type and 3, 5, and 7 emoji response categories Psychological Well-Being Scale was applied to 341 students studying at two state universities located in different regions of Turkey. Exploratory and confirmatory factor analyses and reliability analyses were carried out on the data of the participants who answered the six forms with different response categories. As a result, it was determined that there were no significant differences in exploratory and confirmatory factor analyses and reliability analyses. However, when correlational analyses were examined, it was observed that as the number of reaction categories increased, the correlation scores of emoji and Likert-type scales decreased. 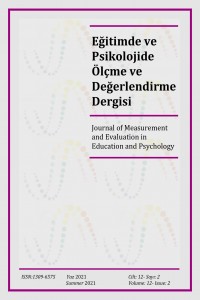