The Satisfaction with Life Scale is a widely used measurement tool. In this study, it was aimed to examine the measurement invariance of the Turkish version of the life satisfaction scale across ages. Of the 483 people participating in the study, 198 were men and 285 were women. Participants were divided into two age ranges, 18-24 and 25-43. A first-order single factor solution was provided for both the entire group and all age groups. The findings showed that the configural invariance was achieved by age groups. However, metric invariance could not be provided for age groups. The absence of equivalent factor loadings between the ages of 18-24 and 25-43 means that the latent structure measured by life satisfaction according to age groups does not have the same meaning. Partial metric invariance was obtained when the constraint of the 4th item parameter was freely estimated in further analysis. Subsequent analysis showed that scalar invariance was supported. On the other hand, full strict invariance could not be obtained, but only partially when the parameter constraint of item 1 was released. In summary, the results of this study revealed that comparison of age groups is possible with invariant items. It is hoped that this research will help us to clarify and deepen our inferences about life satisfaction and lifespan. 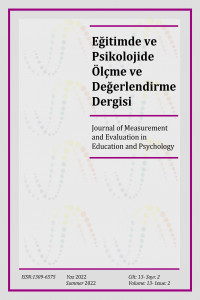