The Journal of Migration Studies

In recent years, national and international human rights organizations have started to prepare public spot advertisements to prevent discrimination against im­migrants worldwide. In these advertisements, it is stated that the discrimination against immigrants is illegal and that the immigrants have made significant cont­ributions to the countries where they live. It is seen that public spot advertisements have been prepared against immigrant discrimination especially in the countries that let in immigrants continuously. One of these countries is Chile, where the migrant population has increased statistically. In this study, the public spot advertisement “Yo Aparto”, which was prepared by the Chilean National Human Rights Organization (INDH) against immigration discrimination, was examined. It was tried to reveal what kind of messages were given against the immigration discrimination in Chile through the visuals used by the INDH. In the study, semiotic analysis method in qualitative research methods was used. In the findings of the study, it was seen that the migrant discrimination in Chile was explained by statistical data. On the other hand, highlighting the daily life of the immigrants, It was tried to be explained that migrants living in Chile have adapted and contributed to the society. 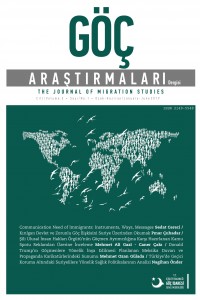