Journal of Geodesy and Geoinformation

Deformation analysis, one of the main research areas of geodesy, plays an important role for human safety. It is extremely important to determine the horizontal and vertical position changes and deformations due to the movements of the earth's crust and to take preventive measures against possible disasters accordingly. Identifying crustal deformation studies is considered as one of the important issues that scientists are trying to solve. Scientists have to devote a large part of their time to solving this problem. However, the increasing interest in crustal movements and rapid developments in technology have made it necessary to use new software in deformation analysis. Here, a web application has been developed using open source software for static deformation analysis so that expert engineers who are interested in monitoring and analyzing deformations can access evaluation software more easily and make their analysis easier. In this way, every person or institution that wants to organize geodetic data within the scope of 3D deformation analysis and access the results to be obtained from these data quickly, accurately and completely when necessary will benefit from this application. In this context, primarily HTML (Hyper Text Markup Language) and CSS (Cascading Style Sheets) applications were made to create the web platform. In addition, deformation analysis applications were developed with Javascript, one of the client-side programming languages. In order to use this program, first, the ASCII (American Standard Code for Information Interchange) file of the base solutions in a period is obtained from the Leica Geo Office program and transferred to the application. With these base solutions, the periods to be compared in the web application are selected and the deformation analysis is performed. As a result, in this study, the prepared web application will be evaluated with a data set and information about the technical infrastructure of the platform will be given. Thus, a new dimension will be added to the platforms used in deformation analysis and static deformation analysis results that users may need will be presented visually. 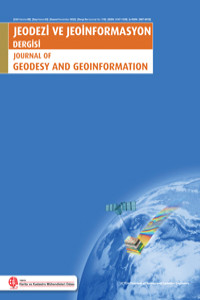