Recently, environmental problems caused by petroleum-based plastics have been increasing. Therefore, researchers have begun to investigate new materials that may be alternatives to plastics. Bioplastics are considered as green materials alternatives to plastics and they are produced from renewable resources such as corn and potatoes, or microorganisms under certain conditions. In addition, most researchers are concerned with renewable resources for non-food using, such as bioplastic production. For this reason, researchers have been focusing on the utilization of the wastes as bioplastic products. In this study, the bioplastic was produced from potato peel as the food industry waste. Also, some properties of the produced bioplastic such as water absorption capacity and biodegradability were analyzed. Furthermore, water absorption capacity and biodegradability of a commercial bioplastic were also determined in order for the comparison with the one produced from potato peel waste in different conditions. It was found that the produced potato peel bioplastic (PPB) had higher water absorption capacity than commercial bioplastic (CB). Therefore, PPB may not be used in the food service industry but can be used as packing material. Biodegradability tests showed that PPB biodegraded at about 71% in moist soil and 100% in vermicompost within four weeks. On the other hand, it was determined that CB was not degraded in the soil or in the compost in four weeks. Therefore, as a food industry waste, potato peel can be used in biodegradable bioplastic production. In this way, petroleum-based plastic pollution may be decreased both in Turkey and the world. 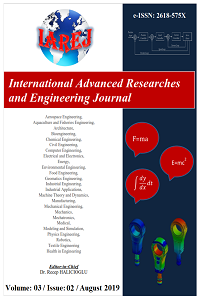 This work is licensed under a Creative Commons Attribution-NonCommercial 4.0 International License.
Any further distribution of this work must maintain attribution to the author(s) and the title of the work, journal citation and DOI.
Open Access Journal System - BOAI