International Journal of Computational and Experimental Science and Engineering

As a result of the researches, it has been revealed that heart attack is the number one cause of death in the world. This problem will continue to increase, especially today and in the future. In this study, a heart attack was predicted by considering the factors affecting heart attack. Due to the uncertain conditions in heart attack, the fuzzy logic method, which is frequently used in healthcare, was used and expert opinions were taken into account in the model created. 576 rules were defined using the Mamdani fuzzy inference method. The study was tested with 10 patient data and the results were compared with the actual values. In addition, multiple regression analysis was performed, variables that had a significant effect on heart attack were determined, and the relationship between dependent and independent variables was examined. It was shown in the study that dependent variables explained the independent variable by 41.9% thanks to the multiple regression analysis. The regression equation obtained in line with these results significantly predicted the heart attack and the effect levels of the independent variables were determined.

Simulation of gamma-ray shielding properties for materials of medical interest 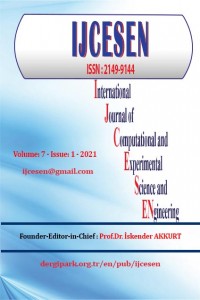 All publised articles in IJCESEN are licensed under under the Creative Commons NoncCommercial 4.0. International License