The research is carried out to determine the effects of different dates and temperatures on shoot length, fruit weight, oil content %, and maturity index of Gemlik and Memecik olive cultivars. The phenological growth stages of cultivars in ‘yield’ year were also described in the study using the BBCH (Biologische Bundesanstalt, Bundessortenamt, Chemische Industrie) scale. The shoot length observations were made on trees in the ‘on’ and ‘off’ periods between March 15, 2017, and December 29, 2017, every 15 days. It was determined that the shoot elongation of the trees in the ‘off’ period was even longer compared to the trees in the ‘on’ year. While the fruit weight of Gemlik had the highest value (3.775 g) on October 30, it had the highest value (3.330 g) on November 15 in Memecik. While fruit weight increased for 153 days for Gemlik, this period was determined as 122 days for Memecik. The maximum oil contents (%) were determined in Gemlik with 29.071 % on December 30 and in Memecik with 22.180 % on December 15. The maturity index of olive fruits reached its maximum level on December 15 in both varieties. As a result, it has been revealed that there is no serious difference between the phenological stages of the trees in the period of ‘on’ and ‘off’ depending on the periodic fruit yield. Moreover, the shoot development is generally more in the trees with ‘off’in terms of the course of shoot development, and when the pomological analysis regarding the productivity status are examined, there are some serious differences. 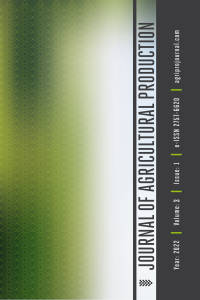