Journal of Faculty of Pharmacy of Ankara University

UPREGULATION OF MIR-17 AND MIR-221 BY BENOMYL, CARBARYL, MALATHION AND DIAZINON PESTICIDES IN MICE BLOOD

Objective: Increasing evidence demonstrate that the expression of miRNAs is affected by several known toxicants and environmental contaminants. To evaluate the toxicity effect of the pesticides including benomyl, carbaryl, malathion, diazinon on male Balb/c mice, expression profile of two oncogenic miRNAs were analysed by real-time PCR.
Material and Method:The 72 male mice were divided into 6 groups (n = 6 per group), including control (0 mg/kg), malathion (30 mg/kg), carbaryl (20 mg/kg), benomyl (30 mg/kg), diazinon (20 mg/kg) and mixture of all pesticides. Mice were intragastrically gavaged for 60 days, then sacrificed on the 30(th) and 60(th) day. The levels of oncogenic mir-17 and mir-221 in the serum were measured.
Result and Discussion: The results showed that compared with the normal controls, mir-17 and mir221 were overexpressed in all treatment groups during 2 months. The expression level of miR-17 and mir-221 after 60 days were 9.2-17.7 fold and 1.9-4 fold higher than the first month respectively. The lowest increase was 1.9-fold, belongs to mir-221, which is still enough for easy diagnosis. These results provide new insights into the negative pesticide’s carcinogenic probability via dysregulation of two oncogenic miRNAs. Our results suggest that due to positive association between mir-17 and mir-221 levels and the risk of toxicity, these miRNAs might be a useful biomarker in malignancy prediction and have a diagnostic value. 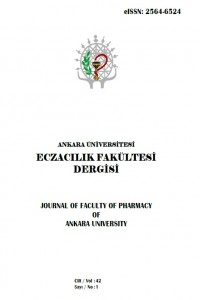 The Journal of Faculty of Pharmacy of Ankara University is an international medium, an open access, peer-reviewed journal for the publication of  original research reports, reviews and short communications in English or Turkish on relevant developments in pharmaceutical sciences., Proceeding of scientific meetings may be published as special issues of supplements to the journal. Additionally, it contains previous and forthcoming national and international scientific meetings with social activities in pharmaceutical areas.