The Roots of Tourism: Hippies

Tourism has developed in Nevşehir and Antalya, two of the most significant destinations of today’s Turkey, in 1960s. In line with the previous study in the related literature, it is possible to mention that the tourism activities in those regions have been triggered by the visits of the hippies. In this study, it is aimed to reveal the contribution of the hippies to the development of tourism in Cappadocia (Nevşehir), Side and Alanya (Antalya), which have become significant tourism destinations in Turkey. For this purpose, the transcripts of the interviews of the Turkey Tourism History Project, which describes the tourism development and history in these regions, were subjected to document analysis. The impact of hippies on Turkey’s tourism has been explained within the framework of Social Exchange Theory. As a result, it has been determined that all stages of the social exchange theory have been observed between hippies and local people. The local people, who initially approached hippies with prejudice, changed their perspective towards hippies in a positive way with the effect of many externalities. 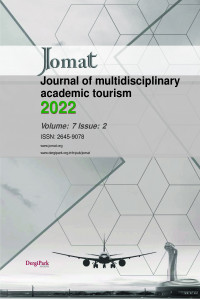 All the contents of this journal licensed under a Creative Commons Attribution (CC-BY) 4.0 License (From September 2022)