Journal of Medicine and Palliative Care

Background: Knee joint has great importance on daily living activities thus gonarthrosis does affect quality of life of patients very dramatically. Total knee arthroplasty (TKA) is accepted as gold standard in order to cope with pain, deformity and instability especially in patients with gonarthrosis who are in terminal stage. Physical therapy and rehabilitation programs are known to increase the success of this surgical procedure. As edema around knee joint is one of the major postoperative complications, which prolong recovery process, it is important to use therapeutic modalities against this problem. Objective: In this study it was aimed to evaluate the effectiveness of manual lymphatic drainage (MLD) following TKA on edema, range of motion, pain, independence of daily living activities, gait distance and knee functionality. Material and Method: 16 patients with TKA were divided into two groups while one of them is applied standard postoperative rehabilitation procedure (exercise therapy, cryotherapy and positioning) and the other group had MLD therapy on the second and fourth days of the postoperative process for thirty minutes and in one session during the day in addition to standard protocol. On post-op 2nd, 4th, and 6th days, the volumetric changes were calculated based on a formula of Sitzia et al. for each 4 cm segment of the lower extremity, active ROM and knee posture at rest were measured by a universal goniometer, pain by using visual analog scale (VAS), walking distance by calculating total walking distance in a day, independence level in daily living activities by using Functional independence measurement (FIM) scale. In addition, Lysholm knee score was calculated on postoperative 15th day in order to evaluate functionality of knee joint. Results: At postoperative 2nd day, 4th day and 6th day, the mean of FIM (p=0.972, p=0.575, p=0.398, respectively), active ROM (p=0.288, p=0.522, p=0.622, respectively), knee posture (p=0.870, p=0.521, p=0.445, respectively), gait distance (p=1.000, p=0.258, p=0.113, respectively), volume of the operated lower extremity (p=0.451, p=0.384, p=0.268, respectively), VAS for pain daytime (p=0.192, p=0.488, p=0.506, respectively) and night (p=0.137, p=0.562, p=0.748, respectively) were similar in both MLD and non-MLD groups. The mean of Lysholm score was 46.25±24.50 in MLD group and 61.12±17.70 in non-MLD group (p=0.186). Conclusion: Although there is no significant difference between groups, the effectiveness of MLD can be showed in studies which will be performed with a larger sample size. 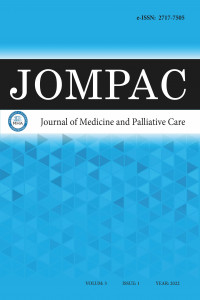 TR-Dizin, EBSCO, DOAJ, OAJI and ProQuest Index are in process of evaluation.