ERGATIVITY IN KURMANJI KURDISH AND DEVIATIONS FROM THE CANONICAL PATTERN

Ergativity is a grammatical pattern used in linguistics since the beginning of the 20th century and has
still been under discussion. This study deals with the ergativity in Kurmanji Kurdish and deviations from the
canonical pattern. Dixon (1994: 2) claims that almost a quarter of the languages spoken around the world
highlight ergativity however according to Kareem (2016: 91) not even one of them is morphologically and
syntactically purely ergative but instead all of them show both ergative and accusative features. Kurmanji

Kurdish is a good example of this case. Because it is ergative with transitive verbs in past tenses but it has

accusative alignment in present tenses and all intransitive verbs.
Whereas Bynon (1979) studied ergativity in Kurmanji Kurdish and used the term ‘’ergative’’ for this
language, it took more than two decades for Kurdish grammarians to use the term. Since then this ergative
construction and its basic rules have been displayed in Kurdish grammar books. However all features of the
ergativity in Kurmanji Kurdish and deviations from the canonical pattern have not been completely revealed in
Kurdish grammar books. Therefore in this study deviations from the canonical ergativity pattern in Kurmanji
Kurdish are dealt with and several samples are uncovered. 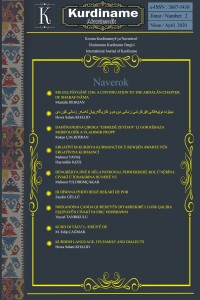 We are waiting for your articles for the November (7.) issue.