One of the most important events in the history is the event of emigration (the hijrah). The Prophet (pbuh.), have recommended his companions whom were being crushed with the pressure from polytheists of Mecca, to move other places where they could live their religion freely. The first Muslims who followed the advice of the Prophet (pbuh.), had first migrated to Abyssinia and then to Medina. In the Qur’an, this sacred journey of theirs is praised. Although this phenomenon expresses the migration of Muslims from Mecca to Medina in a spatial perspective, it has affected the life of believers in various ways in the historical process. The Prophet Muhammad himself (pbuh.)who advised his companions to migrate, has also left Mecca with his friend Abu Bakr and despite all of the attempts of polytheists to stop them on thier way to Medina, they reached Medina where Islam was accepted and thus a new era for Islam had started. In this article the hadith which are available in both sources of the life of the prophet (sirah) and the hadith books under various topics in the hadith literature are compared. Building from our results it will be tried to determined whether it’s possible or not to write a Sirah with the hadith from hadith books just like in the example of Hijrah. Finally the relationship between the muhaddith and historian – ıf exists- will be analyzed. 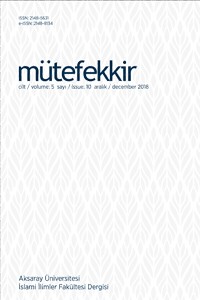