Cyanobacteria, one of the oldest life forms, are also known as blue-green algae. Many species of cyanobacteria produce metabolites called cyanotoxin, which are classified as hepatotoxins, neurotoxins and cytotoxins and are highly toxic to vertebrate organisms. One of these toxins is the Beta-N-methyl-amino-L-alanine (BMAA). Blooms (large numbers or colonies) of the cyanobacteria or related organisms produce one or more toxins that can be dangerous to fish, wild animals and humans. There is not enough information in the literature related to the genotoxic effect of this toxin. In this study, it was aimed to determine investigation of the cytotoxic and genotoxic activity of cyanobacterial toxin BMAA in human lymphocyte cells by micronucleus assay. Different concentrations (20, 10, 5 and 1 μg/ml) of BMAA cyanotoxin were applied to human lymphocyte cell culture and micronucleus frequencies (MN) and nuclear division index (NDI) were calculated to determine genotoxic and cytotoxic effects. The data obtained from our study were compared with the negative control group prepared with dimethyl sulfoxide (DMSO) and with the well known ethyl methanesulfonate (EMS) with genotoxic effect and positive control group. According to these results; increasing the frequency of micronucleus according to the whole control negative control group that we used BMAA was not statistically significant compared with the EMS (positive control group) (p>0.05). However, no significant cytotoxic effect was found when the results of the NDI were examined (p>0.05). 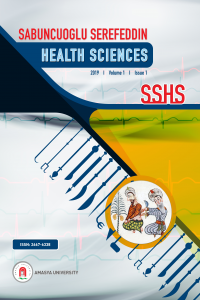