Internet of Things and Patents: Towards The IoT Patent Wars?

Intellectual property is a key, albeit overlooked, issue when it comes to the Internet of Things (IoT). It is still unclear, for instance, to what extent trade secrets can be used to prevent the user from controlling their own device (the so-called right to hack) and to hinder interoperability. Likewise, it is still to be fully explored to what extent intellectual property (database rights) can be used to prevent data portability. This paper focuses on patent law and, namely, on computer-implemented inventions by giving account of the approaches followed in Europe, United States, and India. With the IoT patenting activity being over eight times larger than the general worldwide increase in pat­enting, research on this field appears critical. The occasion of this study is the adoption in 2016 of the final version of the Indian guidelines on the examination of computer-related inventions, which have been surprisingly overlooked in the legal literature. The main idea is that the Internet of Things will lead to a dramatic increase of applications for soft­ware patents and if examiners, courts, and legislators will not be careful, there is the concrete risk of a surreptitious generalised grant of patents for computer programs as such (in Europe) and for abstract ideas (in the United States). The clarity provided by the Indian guidelines, following a lively public debate, can constitute good practices that Eu­rope, the United States, as well as the Republic of Turkey, should take into account.With the increase of IoT patents, it is foreseeable the shift from the smartphone wars to the IoT wars, as evidenced by some recent litigation between Fitbit and Jawbone. The (perhaps cold) war seems impending, due to a number of reasons, such as the complexity of the supply chain, the several domains in which the IoT is divided and the composite nature of the IoT devices. 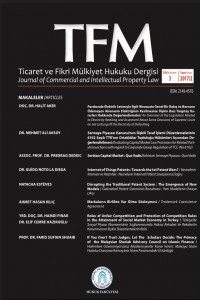