The objective of this study was to determine the stability of 11 different rapeseed genotypes in terms of seed yield, throughout 3 years (2014-2015-2016), 3 locations (Tekirdag, Kırklareli, Edirne), in total 8 environment in Thrace Region. The experiment was designed as a randomized complete block design with four replications. The aim of this study was to determine rapeseed genotypes having a high adaptation for seed yield. Parametric (Wi2, bi, Sdi2, Bi, σi2, ri2, Sxi2, CVi and Pi ) and non-parametric (Si(2), Si(3), Si(6), RS and TOP) stability statistics were used to determine stability of the genotypes. The analysis of variance for seed yield showed that genotypes, environments and genotype by environment interaction all were significant (P˂0,01). According to parametric and non-parametric (except TOP methods) stability analysis, genotype Wosry 142 was determined as a well-adapted genotype; genotype Wosry 144 poorly adapted genotype in across environments. Genotype Wosry 142 may be recommended for cultivation in the different environments tested. 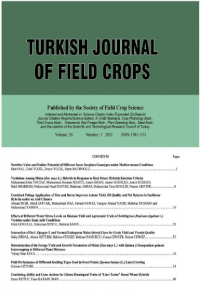