Central venous catheterization (CVC) is frequently used in urgent intervention needed cases and in patients that require long-term vascular access. The catheter tip perforating the ventricular wall leading to a cardiac tamponade is a complication with high mortality. A 26-year-old female patient with IgA nephropathy was admitted to the emergency department with complaints of fainting at home about 2 months after taking the hemodialysis program through a jugular venous catheter. Echocardiographic evaluation revealed fibrin-rich, intense pericardial fluid located in front of the right ventricle and causing collapse in the right structures (Figure 1). The patient was evaluated as pericardial tamponade upon hypotension (70/40 mmHg) and tachycardia (140 beats/min, Figure 2) existence and pericardiocentesis was planned through the sub-xiphoid region. About 650 ml of hemorrhagic pericardial fluid was evacuated with a pigtail catheter inserted under ultrasound guidance. Patients whose hemogram levels were stabilized, blood pressure and heart rate returned to normal was discharged from the hospital. She was removed from the hemodialysis program after her urea, creatinine and urinary output evaluation and nephrology outpatient control was suggested. This rare, mostly mortal complication had a dramatic response to the appropriate treatment if it is recognized earlier. Adequate training and following procedures for catheter placement will be the most effective prevention to reduce the risk of such complications. 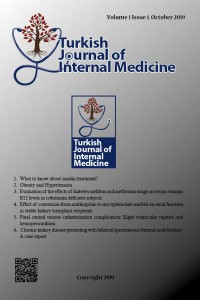