Return from Civilization to Primitivity in The Scarlet Plague

Throughout history, there has been an interest in epidemics and literature. Human beings discuss their pain, happiness, love and sorrow, as well as the epidemics that cause the loss of their fellows in literary works. The repercussions of epidemics can be seen in many novels, theater plays and folk songs. Jack London's novel The Scarlet Plague is a memoir of the loss of billions of lives as a result of the plague epidemic that took place 60 years ago through the words of an old professor named James Howard Smith in 2073. In the novel, Howard Smith, who walks with his grandson named Edvin to graze the goats and comes next to his other grandchildren Hou Hou and Cleft Lip undertakes the role of narrator. While the professor describes the plague epidemic that took place in those years in all details, he also describes the brutality of the human being, whose wild side emerged during this period. Accordingly, these events took part in a period when civilization disappeared, humanity returned to its primitive times, and the greatest goal became survival, agriculture and animal husbandry. All cities were destroyed and wild animals such as bears, lions and wolves spread everywhere. Describing the struggles of doctors and bacterial specialists to treat patients and find vaccines, the author does not neglect to criticize capitalism in some parts of the novel. The censorship of the epidemic by the media by the executives is also discussed as the secondary theme. This study aims to analyze the dystopian view of the future to the present based on Jack London's novel The Scarlet Plague. 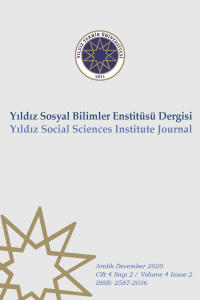