Studies to prediction of soil moisture constants and other soil properties rather than direct measurements were never dwindle importance. Models were derived from other soil properties obtained easily. Therefore, in this study focused on the predictability of some moisture constants, whose determination was often difficult and time-consuming, from penetration resistance measurements. In the improvement of alternative models for the estimation of moisture constants; in addition to penetration resistance, textural fractions (sand, clay and silt), bulk density, CaCO3 % and organic matter contents were included. The models were created according to soil groups with different textures (sandy, loamy, clay) for moisture constants at 0.1, 0.33, 0.5 and 15 bar. In the models for estimation of 0.1, 0.33, 0.5 and 15 bar moisture content, the highest differences in R2 values (0.61, 0.60, 0.64 and 0.59) between the actual and the predicted data was obtained for loamy soils. For this group, the root means square error (RMSE) ranged between 1.32 and 1.90 %, and in addition, the mean error (ME) was determined to be in a range from 1.53 to 2.05 %. For the estimation of moisture content at different soil moisture tensions using organic matter, bulk density, clay and penetration resistance properties, the coefficient of determination ranged from 71 to 77 %. Therefore, it is concluded that the alternative models, developed using penetration resistance or by the addition of some other soil properties, could be used safely in the loamy texture soils. 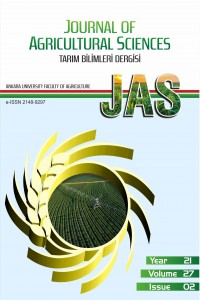 Journal of Agricultural Sciences-Tarim Bilimleri Dergisi by Ankara University Faculty of Agriculture is licensed under CC BY 4.0